My personality has just enough of the obsessive and compulsive that I struggle with open world games. There’s always more to unlock or discover, and if there are multiple endings my psyche nags me until I see all the outcomes.

But I’ll be honest: I didn’t finish Far Cry 4. Well, aside from the secret ending right at the beginning. And for me and my above-listed personality, that is uncharacteristic. So what was different with Far Cry 4?

First of all, I want to emphasize how nice it is to see a different locale and populated by “geographically-accurate” ethnicity. There aren’t many white people in this game, and none of them encourage affinity. I also want to highlight that Far Cry 4 does a solid job of reflecting the gritty, complex happenings of problem spots we read about. With the war in Syria a great parallel example: Who’s bad? Who’s good? How do you tell the rebels from the extemists? Can a newsreader summarize the problems into some convenient sound-bite? Absolutely not. While President Bashir Assad was “painted black” and the rebels “painted white” at the beginning, everything’s a murky grey now.

Torture: just one of many example of gritty subject matter Far Cry 4 deals with in a blunt, believable way

Far Cry 4 presents these kinds of issues with a variety of dubious allies and decisions to make to find out more about Kyrat, its past and its potential future. For example, do you burn the opium fields and destroy the corrupt government’s means for income? Or do you save the fields for the rebels and use the money to help defeat the same government? Which is right? Which is wrong? Ubisoft intentionally leaves this unclear, challenging the player to consider that their actions may not be having the clear-cut intentions they hope.

I have to give credit to Ubisoft for permitting this angle to be reflected in their game. It is uncharacteristic of mainstream games to take a distinctively “unHollywood” like approach. This game often feels more documentary than action movie (though there is more than enough action to go around). A particular standout is the character of “King” Pagan Min, whose eccentric (and somewhat unhinged) personality is as vibrant as his suit. Sadly, he doesn’t feature as prominently as I’d like, considering other characters come across much less compelling. He’s an easy guy to hate at the beginning, but as players encroach on the ending he doesn’t seem as out of place (or crazy) as you’d expect.

Back to my problem. With the “Golden Path” rebel’s two leaders always at odds on how to proceed, your character is brought into the fray to be the definitive voice on which leader’s plans are applied. In the game’s final act, you must choose which leader you will back in a final mission: to destroy (or capture) a holy temple. Whomever you support will ostensibly become the leader of the Golden Path (and ultimately, the country). 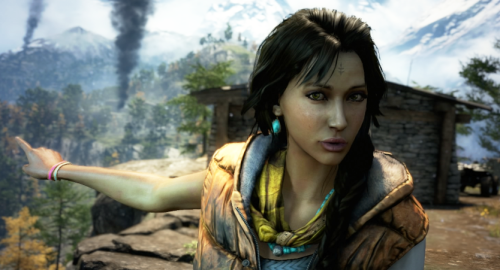 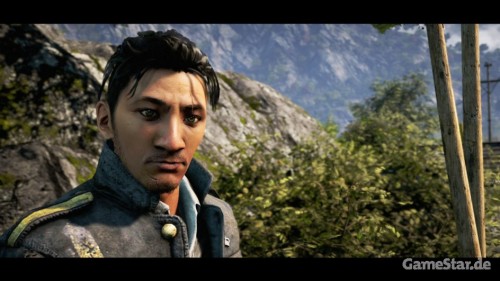 The two leaders of the Golden Path: Amita (top), and Sabal (bottom)

So I heard Amita’s argument. Then I heard Sabal’s. And I must admit: I didn’t like either of them. I wanted a third option, which pushed me onto the Internet to try to figure out why I’d want to choose from two bad choices. I ultimately found that whomever you support, it’s still a bad choice. And here is where the game falls flat for me.

Again, I appreciate the effort put the player into a real-world, complex political situation. However, in their narrative delivery this open-world game became distinctly limiting. Instead of the bad choices, why couldn’t my character, a Kyrati-expat, do his own thing? Don’t I have as much right to become the leader as these others do? Unfortunately, in a game designed around freedom, I had none.

And so, with all the Bell Towers, Fortresses, and Outposts captured, I threw up my hands, quit the game and watched the endings on Youtube. While I don’t need a Hollywood ending, I think most players ultimately feel compelled to want to solve problems and try to do “the right thing” as best as we can. Alas, in the case of Far Cry 4, that real-world option is not open to us.

Establishing a little “Unity” to my development
“Philosophical Portal”: The Talos Principle