As soon as I first heard about The Talos Principle, I was excited. Not as much because CROteam was known for Serious Sam (which I’ve never been partial to), but because Tom Jubert and Jonas Kyratzes were attached on the project as writers. I’ve had the pleasure of meeting both at GDC, and both lean more towards philosophy and exploration of concepts. So this will be a puzzle game with some genuine depth to it?

And…. I wasn’t disappointed! For those who are familiar with Valve’s acclaimed game Portal (which I presume is most people), the Talos Principle:

– provides a similar test-like environment in which the player must solve physical puzzles using the tools they are provided
– focuses less on the player’s need to be dexterous during play (it’s not pixel-precise, nor does it require quick reflexes)
– focuses much more on the “narrative”: a mashup of found-texts like diaries, literary excerpts and emails which explore concepts such as “what it means to be human”
– includes an insane number of little easter eggs 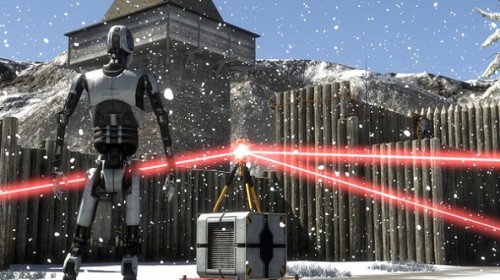 Chatting An example of the physical puzzles you need to complete to collect… blocks… why am I doing this again?

The second point is something I think should make it more accessible to a diverse group of players. You don’t have to have first-person-shooter skills to play this game. The game never rushes you or judges you for taking your time (or giving up and trying a different puzzle). In fact, the game will actually encourage you to do so if you seem to be taking a long time! This is tied into the narrative, where the emphasis is put on completing the puzzles rather than speed-running or being driven along by a world-ending scenario. 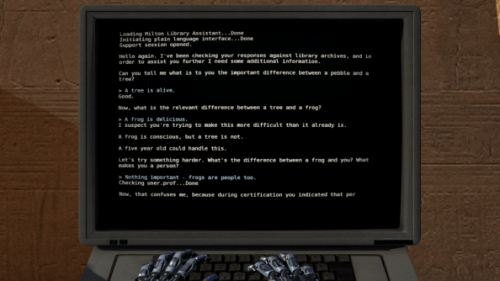 The third point, I believe, is where this game really differentiates itself from its peers. I’ve had a number of game experiences that, while enjoyable at the time, leave me feeling a bit “hollow” at the end. Why did I just invest 30+ hours in this? What did I learn? The Talos Principle actively engages your intellect through its dialogue and readings to consider concepts that apply beyond the game itself. Rather than just react, it hopefully makes you think about the bigger picture of life itself. There is also some self-reflexivity in the game, considering you are using a computer to play the game to … use a computer 🙂 This delivery made me feel both like I was being nosy and being exploratory. It has more gravity than someone barking audio-narrative at you as you play.

If I were to grumble about anything, it would be that the game has so many puzzles that I got a bit tired of completing them after a while (I’m also a completionist, so I did more than I needed to). There also a number of “arrange the shapes to unlock” puzzles which are tedious. Both of these issues may be born from the demand to have games meet a certain number of hours in length (15/20+ hours), and/or it may just be my personal preference (and lack of spare time).

Ultimately, the Talos Principle is a great example of a game that is grown-up. Something adults who are less interested in the twitch-gaming (and mass murder) of Call of Duty could get into. It’s a game that tries not to be hollow, and give you something to take away from the experience.  We need more grown-up games that matter, and this is the kind of experience I aim to reproduce in my own work.

Far Cry 4: Two Choices and no Options
Valiant Hearts: The forgotten war is remembered at last