Valiant Hearts: The forgotten war is remembered at last

AAA game studios are known for their flashy graphics as much as their overly-violent renditions of gameplay. They’re fast, they’re fun, and they’re fluff – when you finish you rarely come away with a more enlightened view.

It’s rare to find a video game that puts forth a mature theme and message, and yet this is the second post in a row where a game manages to do just that (The Talos Principle being the other). It’s even more rare to find a game like this come from a AAA studio, but Ubisoft saw this diamond and wanted to share it.

I’m so very glad they did.

Valiant Hearts is a game that does a great job providing players with the experience, atmosphere, and background research about a war we rarely talk about in games: The Great War: World War 1. While it does take occasional liberties with the narrative to promote drama and gameplay, the result is still very true to events and gives what is likely the first and only game that provides an accessible World War 1 experience through a game. 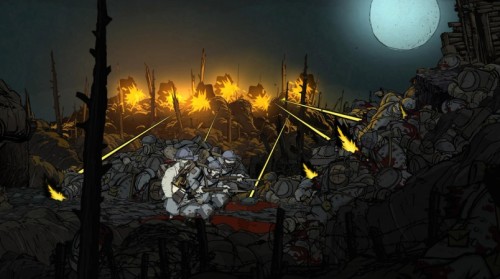 Made at Ubisoft Montpellier, it has some Canadian sensibilities, such as a considerable effort to reflect all the different players involved in the Western Front. The usual suspects of Germans, British, and French are represented, but also other key players such as the Belgians, Canadians, and Indians. Even medics, and their canine companions, contribute considerably to the game. It’s refreshing to see a multicultural cast reflective of real events. Now I can hope this game sold well-enough so they can make an Eastern Front game replete with Ottoman Turks, Australians, Austro-Hungarians and Russians which is even less-remembered these days. 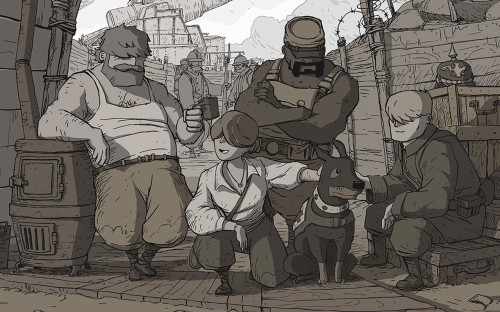 The diverse cast of characters you play in Valiant Hearts

The game itself presents very mature and horrific themes, but does so through its stylized art (think Adventures of Tintin) and tailored gameplay such that the experience is shocking but not repulsive. Rather than take the typical gaming “low-hanging fruit”, the game avoids you overtly killing in the game. While this may sound sterilized, the levels on the front are littered with the injured, and corpses. Player focus is placed on solving puzzles and helping others, and as the medic directly treating the injured. It provided such a fresh experience and the pace allows you to take things in and appreciate the details. 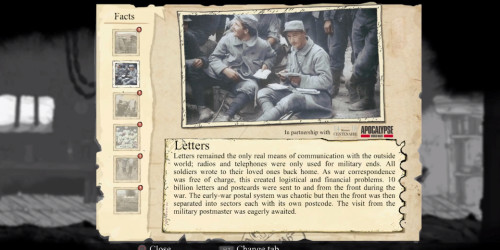 The only overtly-“educational” aspect of this game, completely optional (yet a great read!)

What makes this stand out from a battlefield of educational game corpses is that the game has ensured that gameplay is the top priority. It works well as a game, and because of that it is able to provide historical context in a way that does not disrupt game flow or feel contrived. To me, at least, it reinforces why educational games need game developers to guide the process, rather than educators with a spurious knowledge of how games work. It’s this kind of game that continues to inspire me to work towards finding and defining the balance needed for educational games in the future.

“Philosophical Portal”: The Talos Principle
Hands-off Exploration and The Vanishing of Ethan Carter