What if I just want to stay an indie?

I’ve played a lot of Game Dev Tycoon in the last couple days. If you’ve played Game Dev Story by Kairosoft on iOS or Android, it’s a close relative – Greenhart Games based GDTycoon off of GDStory, and I wish they had deviated farther than they did with the design. I will give them props for releasing a pirated version of their game that results in players suffering from piracy while they play the pirated version. But that’s not what I want to focus on, really.

In a recent playthrough I decided to play against the direction the game wants to you to go, which involves growing your company, your development team, and your game technology. Personally, I think my ideal career would be a small-sized development team, making small games. So while the game encourages you to move out of your garage and to a new office when you make enough capital, I refused. Research new technology? Topics, maybe, but other than that I just researched the Casual game genre, and Marketing (to build hype). And you know what? I was a successful indie: 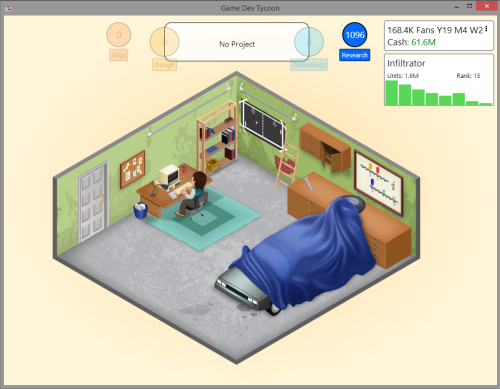 Working out of my garage making games and $60+ million profits from doing so? Dream come true!

You’ll notice in the above picture I’m still in a garage as a solo developer. But check those specifications:

Now this is nothing special for game development success in the Game Dev Tycoon. If you develop a strong team and use the right combo of platform, genre, audience, and game topic, you can release games that can sell well beyond $40 million (I presume into the $100s of millions, but I’ve never gotten that far). But seriously, if this were real life the developers I know would be ecstatic to be indie with $60 million in the bank! Developers moving to indie have a much smaller nest-egg of funds when they set out from school, game companies, or other careers to try their hand at game development as a career. 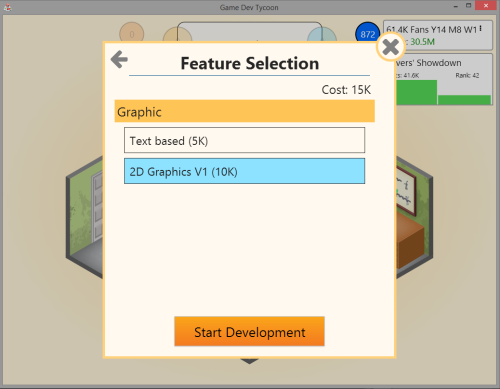 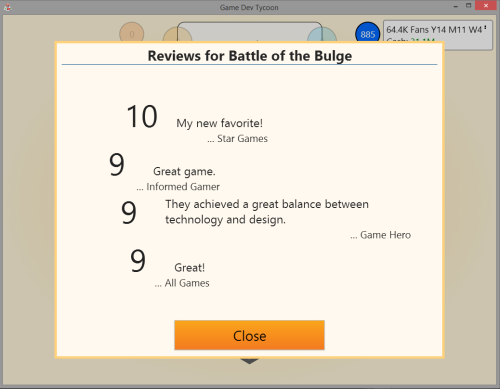 Now, truth be told, I found a game-breaking bug in Game Dev Tycoon. The game pushes you to upgrade your technology, such as 2D->3D graphics, mono->stereo->surround sound, better AI, etc. But I just happily ignored these research techs, stayed in my garage, and did what I wanted to do: make games. So the game allowed me to release “Infiltrator”, a Spy-Adventure game with basic 2D graphics and basic (pc speaker I think) sound, to rave reviews and 1.6 million sales. The game cost me $43k to develop. And to highlight the historical timeline, while this was selling like hot cakes, the XBOX 360 came out. Heh.

So as I said: the game is kind of  broken. But there is an unexpectedly-positive message in there. You don’t have to follow traditional paths to get into games, just as you don’t have to become a giant corporation if you have a hit game. There’s a reason lots of veteran developers leave established companies and set up their own small development houses. These vets want to get back to the game development that made them want to do it in the first place. Indie developers want to have creative control over what they make, with opportunities to experiment and try something that doesn’t sound like it should work, but just might (or might not). Without risk takers like these, we wouldn’t be shooting fish with guns, checking papers at immigration, exploring family relationships, or exploring a house trying to make sense of things among other things.

Keep building experiences like these indie devs, and I’ll keep buying them.

Can’t get to GDC? Live vicariously (on your own schedule and dime) with GDC Vault
Thesis – Some updates